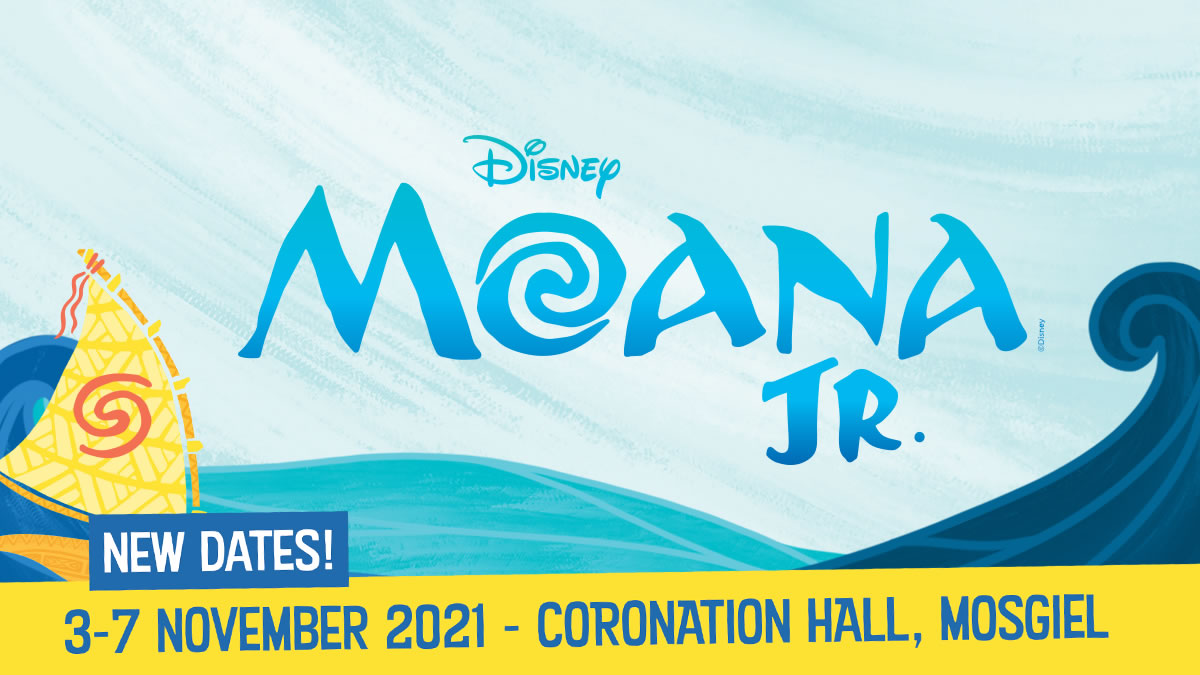 Taieri Musical is excited to announce that we will be bringing Disney’s Moana Junior to the stage in October November 2021! 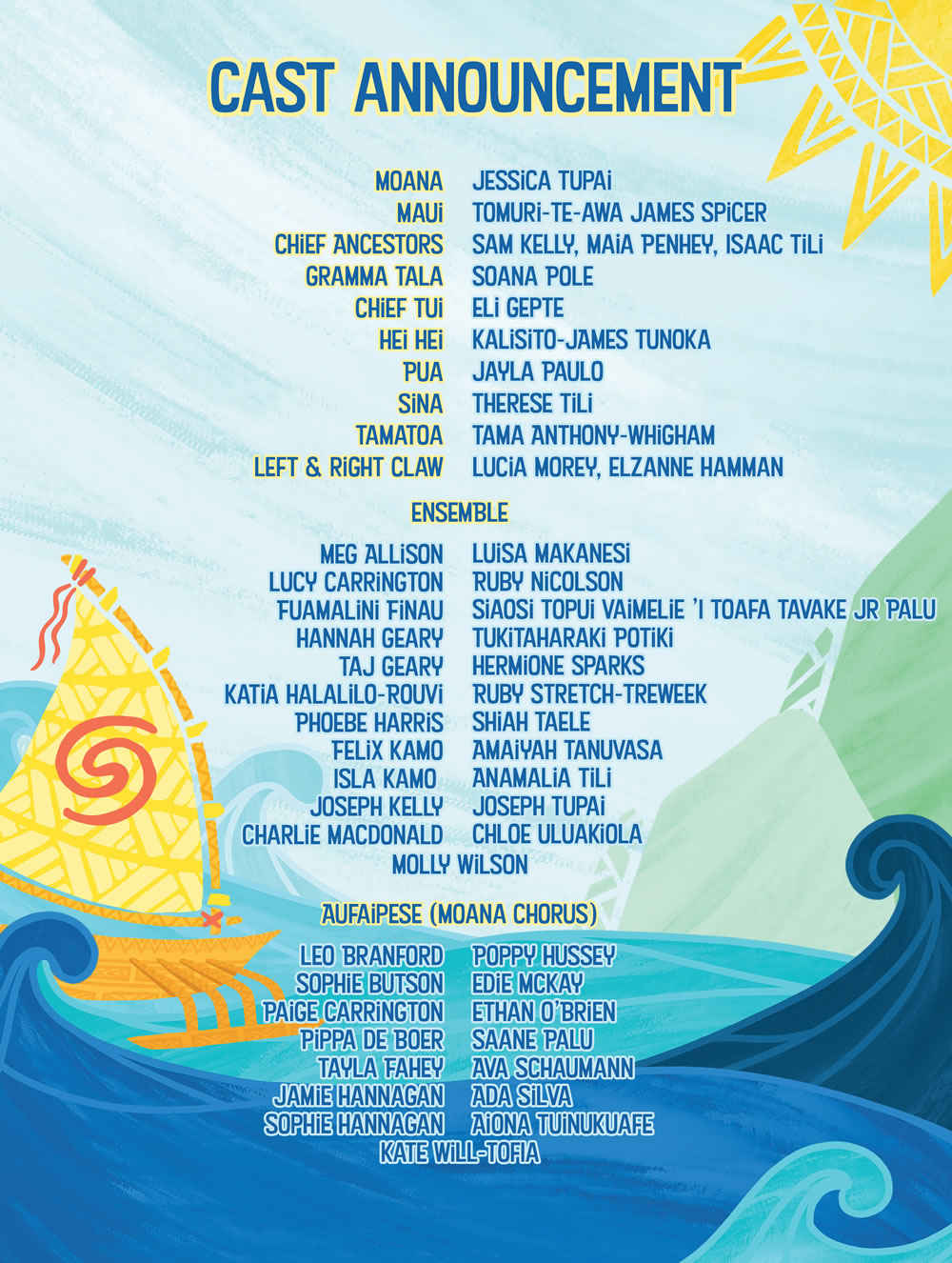 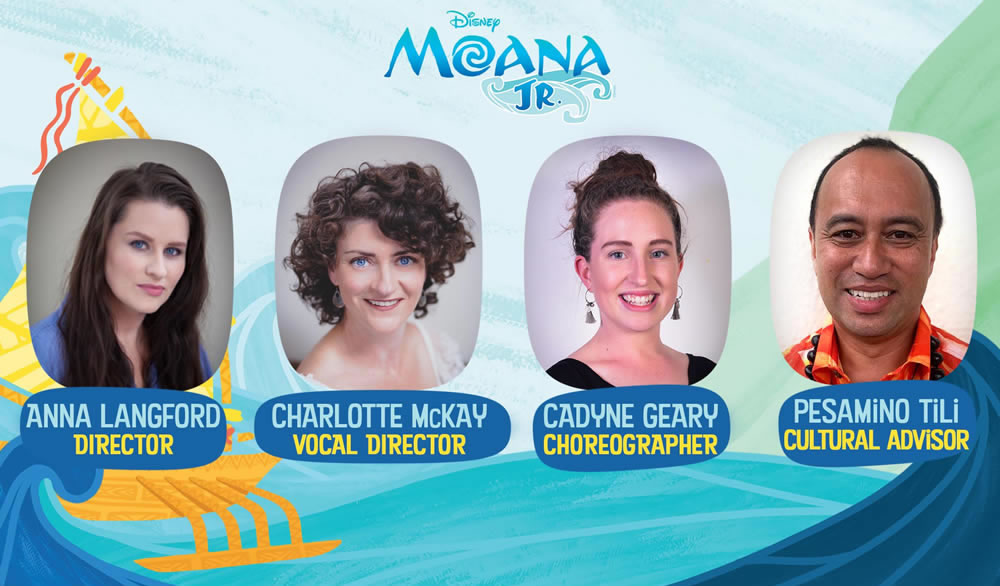 Anna works as a senior teacher at The Voice Lab NZ where she enjoys teaching contemporary voice and performance to a wide range of ages.

As a performer her NZ credits include: Elphaba in “Wicked”, soloist in “The Highlights”, singer in “Rock to Motown”, Brenda in “Blood Brothers”, Diva in “Priscilla Queen of the Desert”, “Sing for Your Supper” for Auckland Theatre Company, “Over the Rainbow” (self written cabaret) at The Basement Theatre, “Beauty and the Beast”, Mona in “Chicago”, “Grease” and “Cats”.

UK credits include: Martha in “The Secret Garden”, Sally in “Live Like Pigs”, Claudia in “Angels, Punks and Raging Queens”, Young Sally in “Follies”, singer in “Grateful in Concert” at Cadogan Hall and self-produced cabaret shows “This Has Nothing to Do With…Love” and “Revive Me” at the Battersea Barge.

Charlotte’s experience as a vocal practitioner has covered many musical genres and taken her around Australasia and beyond. Her formative vocal experiences came from classical music, specifically opera and choral work. After being part of several Youth choirs and Opera programs, Charlotte studied Performance Music at Victoria University, gaining a degree in Performance Voice. During this time, Charlotte also worked in the NZOpera chorus, and was a member Sings Harry, a vocal ensemble dedicated to performing vocal works for 8 parts with only 8 voices. With this group, Charlotte recorded several original New Zealand compositions and toured the country with Chamber Music NZ. Charlotte has wound her way back to music theatre, a genre that gave her first theatre experiences as a child. She has taught voice privately in Dunedin, earned her level 1 TOSCA certification, and had her first taste of musical directorship as the Assistant Musical Director for Taieri Musical’s production of The Sound of Music. Subsequently she was the Vocal Coach for Musical Theatre Dunedin’s production of Wicked.

Cadyne is a secondary teacher at St Hilda’s Collegiate, working alongside young wahine who inspire her, sharing a love of dance and physical education. She has been a dance and performance educator for many years now working at Black and White Studios as a contemporary teacher. Cadyne also works as a contracted choreographer and tutor, with past projects including the Taieri Musical Holiday Programme, Musical Theatre Dunedin’s Theatre Restaurant Stage to Screen and most recently, choreographing for DKCM for corporate entertainment gigs. Cadyne also has experience as a fitness instructor, working for a number of years as a yoga, pilates and silks instructor at Airfitness Health Club and Physio.

​ The above quote inspires Cadyne as a choreographer as she believes performers have as much to offer as her own expertise. Creation is a unique experience in which one can take influence from performers to shape a vision. Much like the Kowhaiwhai patterns seen on the rafters of whare nui, learning is a collaborative, intertwining experience between learner, teacher and learner’s whānau. No colour, pattern or shape is more prominent than the other. Teacher and learner exist side-by-side, walking down the pathway of learning, a teacher providing tools along the way so learners can pave the way. Students use their identity to help them learn within an inclusive classroom environment and their uniqueness is celebrated. Cadyne is excited to begin work on Moana, the perfect opportunity to apply this practice, using performer cultural identity to shape movement and bring the show to life.

Born in Samoa, Pesamino is now a very loud and proud Dunedinite. He is married with five kids and is very active in the Pasifika and his church community. Pesamino featured in a number of musicals at high school, but chose to discontinue this passion after leaving school to give his time to the Pasifika Community. This led to him being on the original committee that established the first Otago Māori and Pacific Islands Festival in 1993, establishing the first Pasifika cultural group at Kavanagh College in 1992, and in 2001, he established the Pacific Islands Centre at the University of Otago. While serving as the President of the Samoan Students’ Association, he was judged best solo male dancer at the national gathering of the Samoan Tertiary Association in 2002. Pesamino has worked as a Teaching Fellow and an Assistant Lecturer in Pacific Studies, where he taught a paper in Pacific Dance. Currently, Pesamino works as the Director of Religious Studies at Kavanagh College, where he also supports the Māori and Pasifika Deans. He is also currently the President of Kia Orana Performing Arts, a group that he has been a proud member of for over 27 years, and is still very active in the wider Pasifika community.

This production is part of our youth programme, which in the last two years has brought a Musical Theatre Holiday Programme to the children of Ōtepoti. Moana Jr however, will be run just like any of our other shows, offering children an opportunity to be a part of the TMS theatre experience and gain skills that will help them transition into adult casts in the future. As such, though membership of Taieri Musical is expected (as is in any of our productions), there is no cost to participate in this production.

Exciting announcement - Disney’s Moana Jr to be produced in Dunedin in 2021!

Taieri Musical are very happy to announce that we will be staging Disney’s production of Moana Junior in Dunedin in November, 2021. This production will be a part of our youth programme, one which is dedicated to engaging the youth of Dunedin in musical theatre.

We are very excited about this project as we hope it is the first step in our efforts to diversify our society to include all cultures that are represented in Ōtepoti. Though we hold open auditions to any and all of our productions, we generally find that we have the same people auditioning for each production and do not often engage members outside of that pool. Our holiday programme, started in 2019, was the first step in engaging youth from all around Dunedin and removing some of the barriers that have previously stopped people taking part in our productions. However, we have noticed that even by doing this, we still miss out on a huge portion of Dunedin’s children being involved in our productions, including much of Dunedin’s Māori and Pasifika communities.

Because of this, when we sat down recently to write our strategic plan (something we have not done before) one of the key goals we noted was to become more diverse across our society. Moana, we believe, is our stepping stone to this. By choosing a production that tells such a unique story about Polynesia, we hope we will engage a new group of kids who haven’t previously been interested in (or known about) our society and what we do. This will lay the foundation for productions to come as we start to build new relationships and can work on bringing this diversity into all aspects of our society.

Though we are excited about putting this production on, we are also aware that we will need help from many members of our Māori and Pasifika communities to ensure that we do so authentically. This will need to happen at all levels of the production including planning, casting and designing. We are aware that we may have needed to engage members of the community in our initial planning of this production, but hope that by starting now, we can ensure that everything is in place by the time we are ready to hold auditions.

In order to ensure that appropriate cultural advice and guidance is provided, we are working with our local Māori and Pasifika communities throughout this project. Having said that, we welcome and encourage queries regarding our choices and process. As previously stated, we hope this is the first step in diversifying our society, and so we really wish to make sure that we are being as open and transparent as we can.